Here is a short history of Our Lady Help of Christians in Folkestone: 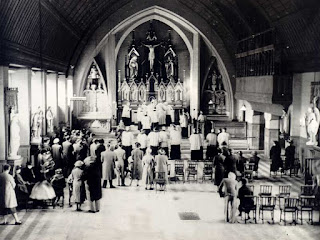 
As the Catholic population of Folkestone grew, mainly as a result of the influx of Catholic workers who arrive from Ireland to build the London to Dover railway line, it became clear that there was need for a Catholic place of worship. During the earlier years, the Mass was celebrated in the private houses.


Around 1860 a building, which had earlier served as an office for Mr. Hart, a lawyer, was purchased and converted into a chapel. The building stood on the south side of Martello Street and the tiny chapel was dedicated to St. John the Evangelist.


The St John chapel was indeed small, accommodating about sixty persons, half of them had to stand. The little building also served as the first Catholic school in Folkestone, the sanctuary being screened off from the body of the chapel for the purpose.


As the size of the Catholic community was rapidly outgrowing the capacity of the tiny chapel, some time in 1869 a construction of a new chapel commenced. The opening service at the new building took place on Sunday 31 January 1870. Once again, an extension to the chapel was screened off and used as a schoolroom.


Plans for a New Church


In 1874, Bishop Danell purchased a plot of land in Folkestone and in 1883 his successor, Bishop Coffin, visited Fr Cahill to discuss the possibility of building a new church on the site. Between 1880 and 1884 different sites were considered, including one, which was to become Kingsnorth Gardens in 1927. Furthermore, proposals were put to Lord Radnor by the Diocesan authorities to exchange the plot for another in West Folkestone but Lord Radnor did not appear to have been very enthusiastic and the matter was dropped.


In 1885 the firm plans were made to construct a church in the site at Townsend.


In the 1880s, Townsend was a rapidly developing area, and the local authorities were anxious to improve the width of what had by then become Guildhall Street. At a meeting of the General Purposes Committee on 9 August 1886, it was enquired of Mr. Pledge what his clients, the Trustees of the Roman Catholic Church, intended to do about the three old cottages which stood there. He replied that they were ready to pull them down when the necessity arose, and would be willing to give up a portion of the land for widening the street.


However, things were not destined to run smoothly for a number of reasons. Fr Dennan had wanted to employ Mr. Walters as Architect but the Diocesan authorities ruled otherwise and Mr. Leonard Aloysius Scott Stokes was finally engaged. In August 1888 the work of constructing the new church had begun. By the summer of 1889 all was ready.


The outside of the building presented an imposing appearance. It was said of it in the 'Kentish Gazette' on 23 July 1889:


"The church is a substantial building in the early Gothic style. It is built of local red bricks with Bath-stone dressings and has two towers. In the space between the towers is a very handsome Gothic window, one of the main features of the building. The wall above - like the towers - has a parapet battlement in stone and is surmounted by a gable with a stone cross at the apex. On the left, and recessed from the Church, is the Presbytery in the same style of architecture, and glazed in leaded lights. The doors - external and internal - are of oak." There were some assertions that the new church opened on 21 June 1889 but no evidence supports this. All recorded reports agree on one date- 17 July 1889.


Opening of the Church of Our Lady, Help of Christians and St Aloysius, 17 July 1889


The morning of Wednesday 17 July dawned with clear blue skies and bright sunshine. There had been fears of rain and indeed the weather was to break later in the day. At one o'clock, the hour appointed for the playing of a game of cricket between the Corporation and Folkestone Cricket Club, a thunderstorm broke. 'The rain fell in torrents', said The 'Folkestone Express'. However, the prayers of the Catholic community were answered and as they gathered outside the new church there was an atmosphere of 'gladness and delight'.


Admission was to be by ticket only - such tickets being obtained from the Presbytery or from the offices of 'Holbein's Visitors List' in George Lane. This was a local newspaper run by and owned by Mr. Ambrose Hans Holbein. Despite being a Protestant, he would appear to have been sympathetic to the Catholics, and his newspaper was at the very forefront of the publicity for the opening. Large notices appeared throughout July, giving full details of the impending event.


At 10.45 the doors were opened to admit the congregation and all were in their places before the stated deadline of 11.15. What a sight the interior must have presented to them on the first day.


"In the interior of the Church a gallery is placed between the two towers, this is approached by a stone staircase in the turret on the right side of the building. The building, which is 138 ft. long and 36 ft. wide between the piers, is spanned by a steel roof, with Principals of Gothic design, and is boarded and paneled on the underside. The Pulpit is of oak. The Font, which is underneath the gallery at the east end of the Church, is of Hopton wood stone.


This description, from the 'Kentish Gazette' July 23 1889 continued; "The main altar is a magnificent piece of workmanship, carved in oak by Meyer of Munich. Above is a large crucifix and statue of the Virgin and St John and below in an arcading are paintings representing St Augustine, St Andrew, St Patrick, St Lawrence and St Francis of Assisi. On the front of the Altar table is a beautiful reproduction of Da Vinci's great painting, 'The Last Supper', and on the table is a very massive and elegant tabernacle."


However, there was one thing that was not ready for the opening - the organ, which should have graced the chamber - so, for the occasion, music was to be provided by a large harmonium. The sacristy was approached under the organ gallery. As an addition to the main altar, the church had two side altars.


At 11.30 the service started. The seating accommodation proved hardly adequate and all 750 places had been taken. The Opening Ceremony included a procession, blessing from the Bishop of Southwark, High Mass and the performance by a number of choirs. This was followed by an afternoon reception in the old schoolrooms.


Bibliography The history of the parish is based on the extracts from:  Catholic Folkestone, A Post-Reformation History by Eammon D. Rooney and Dennis Creighton-Davies